In order to experience a successful healing, a person should eliminate all other spiritual influences from the process; fully trust their decision to accept the healing; and continue the positive energy momentum into the future.

While I was captivated by children’s receptiveness to Leo Jean’s healing, I was equally interested in the reaction of adults.  When Leo directs the energy of the pure white Light* into the recipient of a healing, an instantaneous physical change can take place.   One notable example from twenty years ago that comes to mind was the case of a 57-year-old Portuguese woman (we’ll call her Teresa), who came from her home in Bermuda to see us in Ontario, Canada.  When Teresa came into Leo’s office, she was carrying some documents that her niece explained were the X-rays that had been taken a few weeks earlier.  Teresa had undergone surgery for lung cancer but, upon looking inside of her right lung, the surgeon had stitched her back up, stating that there was nothing they could do for her.  After Teresa had pulled up her sweater to show us the very large scar that went from her back around her rib cage, she indicated with both hands that the cancer was the size of a grapefruit.

Leo very calmly asked Teresa if she was ready to have the cancer removed.  Teresa shook her head in the affirmative, and said that she was too young to die.  She wanted to continue working at the job she had started over 20 years earlier.  Then Leo asked Teresa if she prayed a lot.  Teresa started to describe how she attended mass every day at the church that was just down the street from her house in Bermuda.  She prayed a lot!  Leo went on to ask Teresa if she would stop praying so that he could perform the healing.  Teresa looked up with tearful eyes and agreed to stop praying, if it was going to help her healing.

Leo explained that, when someone prays, they automatically summon spirits.  In order for Leo to effectively help Teresa, she would have to stop summoning spirits, because they would bring negative energy that would interfere with his work.  Teresa asked if it would be all right to continue to pray and go to church after she was healed.  Leo told Teresa that, if she wanted to do so, that was her concern. As Leo did the initial healing work, she would continue the healing on her own.  She was already feeling much better within a few visits.

On her final visit, Teresa’s husband came in with her to meet us.  He wasn’t happy at all.  When he walked into the room, he blasted out at Leo that his wife was one of the best Catholics he knew, always praying and going to church.  Leo said that it was none of his concern and that he should go wait in the car, since he was interfering with his wife’s healing.  Teresa’s husband stormed out, and she was apologetic.  Once she returned home, she might consider never going back to that church again.

A month later, one of Teresa’s daughters came to receive a healing from Leo.  She told us how Teresa had gone back to her doctor for more X-rays.  The tumor was completely gone already, and the doctor couldn’t explain it.  Teresa was happily back at work and still arguing with her husband about going to church every day. Soon afterward, we received a thank you letter from Teresa with a money order.  It was her custom that a person should send money every month to someone who had saved their life.  We returned a letter stating that she was under no obligation to us.  It had been a pleasure to work with her and to teach her how to work with her spirit.  The following summer her youngest daughter came from Bermuda to see us. (See letter at end of post)

It was such an incredible experience for me to be present during the healing of a terminal cancer!  By abandoning her lifelong habit of summoning spirits, Teresa had chosen to live a positive life without the fear of reprisal from some deity.  The healing energy that Leo had directed into the tumor had effectively destroyed the cancer cells.  Teresa had allowed the healing to take place by proper refusal at the spiritual level and that, in turn, allowed her body to reject the cancer.

Leo cautioned me that not everyone is willing to accept a healing, since many people are clouded by negative thoughts about the process.  Fear and doubt will both cause them to block the healing energy, so a person must feel totally confident about their decision before they make a request for a healing.

Not long after we worked with Teresa, we worked with a woman whose husband was a nuclear physicist.  After Leo successfully worked with his wife, he was so curious about the process that he asked for a healing himself.  Leo casually mentioned that he would like to find an instrument that could somehow measure the Light energy that he emitted during a healing.  Upon his next visit, the physicist brought with him a Roentgen scale that measures X-rays and gamma rays present in an environment. Leo held the small cylindrical device in one hand as he sent the healing energy to his wife through the other.  There was a marked change from the normal setting on the scale.  The physicist lifted his eyebrows a little.  He said he’d leave the meter with us until he returned the following week when it should have reset itself.

The next week when the physicist and his wife arrived, Leo announced that he was going to increase the power that would be measured by holding the Roentgen scale himself.  Leo concentrated his power on the scale and then handed it to the physicist.  The man’s jaw dropped as he took a careful look at the scale that now showed the highest reading.  He shook his head and said he couldn’t believe it.  He said that he had never before heard of this scale ever reaching this point.  In his expert opinion it was impossible.  At that point he told us to keep the scale, since he could never return it to his workplace to be recharged.

We subsequently met an instruments engineer who, upon showing him the Roentgen scale, asked where we had obtained it.  He told us that such an instrument is regularly used in settings where radioactivity is monitored, such as in nuclear plants or around X-ray machines.  We later learned that the nuclear physicist was one of the world’s foremost authorities in his field.  Maybe one day we’ll be able to find a device that will effectively measure the physical properties of the pure white Light that Leo uses in his healing.

As we continue our work together, Leo continues to make advances into the detection and removal of much higher-level negative energy sources.  Twenty years ago we began working at a distance with clients who had initially come to see us in person.  Now we regularly work with people from around the world over the phone, with similar results as though they were in the same room.

The positive flow of healing energy traverses any distance to a willing receiver who properly refuses external spiritual influences, fully trusts in the process and commits to ongoing work with their spirit.

(Note: These events actually happened over 20 years ago; I just changed the names for the purpose of confidentiality.) 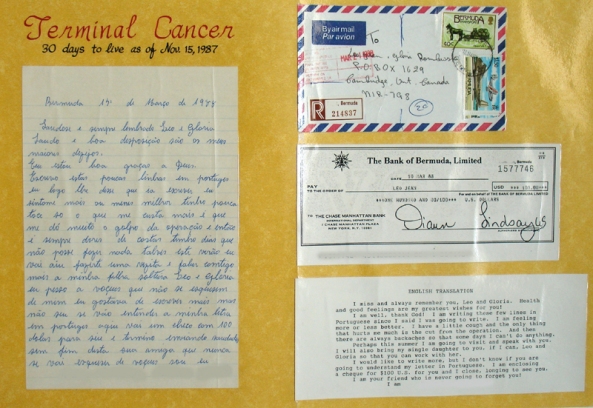