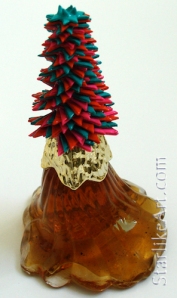 Part of my work involves helping people to become aware of the ways in which they accept negativity and how they can properly refuse it.  It might be helpful to know how spiritual vibrations can pass from the spiritual level to the physical level, so that you can become aware of how to refuse the influence and avoid entangling yourself in this way.

When a spiritual vibration is summoned, it automatically responds, since that is a natural activity for a spirit.  When I remove spiritual negativity/spirits from someone, I remove the exact vibration of each spirit because I’ve acquired the knowledge to do so through my work.  In the beginning, I learned to say the vibration/name out loud, and Leo would pick up that spiritual negativity/spirit.  Over time we became so skilled that we now identify and remove the precise vibrations at the higher level.

There are other ways besides entering a person that a spirit can attach itself to someone.  One common way is for someone to place a spiritually negative vibration into an inanimate object and give it to someone else.  For instance, I was startled to discover this phenomenon many years ago when my ex-husband had offered his wedding ring for me to keep when we split up.  Fortunately, Leo as the mediator of this transaction had placed the ring inside of a small plastic bottle and, when he showed it to me, he asked me not to touch it.  In order to show me that the ring was housing some powerful spiritual negativity/spirits, he placed the ring on its edge on a table and asked for me to observe it.  When he let go of the ring, it suddenly began to vibrate with an energy that increased the vibratory pattern over the next few seconds.  I learned that, if I had touched it, I would have accepted some spiritual negativity/spirits and, in that way, I would have allowed the negativity to transfer to me.

Another similar example of a spiritual to physical transfer brings to mind a request by a young man who phoned from Scandinavia several years ago.  When I spoke to him, he was beside himself with desperation as to how he could rid himself of the negativity that he realized he had accepted.  He told me that he had gone to a party in a neighboring country several weeks before and that someone had passed an object around the room and everyone was supposed to hold it for a moment.  Immediately upon holding the object, the young man told me that he never felt the same again.  He had been having nightmares, headaches and aches and pains all over his body.  He could no longer rest, let alone sleep and he was unable to go to work anymore.  His story was dramatic, but very plausible, given the nature of spirits and how they can be transferred to people in the manner he described.  I asked the young man to call us back in a couple of hours, when we would be able to help him over the phone.  When we worked with him to remove the spiritual negativity/spirits that he had accepted, he had been so overcome with pain that he actually screamed out as we did the healing.  This never happens and I could tell that whatever he had accepted was tied to a much larger source of negativity.  While this young man had a great sensitivity to such negativity, many would be largely unaffected because of their spiritual orientation.

Spirits especially like to inhabit materials such as metal, crystal and minerals, but can enter practically anything.  People can unwittingly or purposefully summon spirits that can enter objects, so it’s important not to accept them by refusing them at all levels.  I used to think that no one would willingly want to bring spiritual negativity/spirits into objects, but many are influenced at the higher level to do just that.  A good rule to follow is to ‘hit’ objects with the Light* (i.e direct the Light into them) when you sense there might be something about it that interferes with you.

When Leo creates his Starlike© art, he brings the Light into every piece. He is strongly aware of how spiritual

negativity/spirits would attempt to interfere with his works after they leave his possession so, as a precaution, he does a perpetual removal on every piece he creates.  This allows the most positive vibrations possible in every one of Leo’s creations.

While no one should be afraid of spiritual negativity/spirits, you should be aware of how to refuse them properly.  By learning to work with your spirit and the Light, you will protect and free yourself from any negative influence.

2 comments on “Spiritual to Physical Transfer”