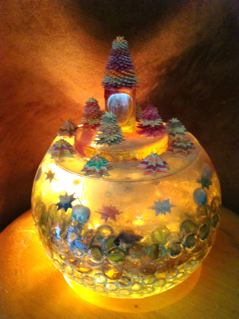 One of Leo Jean’s Starlike Sculptures

Upon meeting Leo Jean I immediately had life changing experiences that brought me from existing as a vulnerable victim to living as a confident person who is fully responsible for my entire being.   It wasn’t until I saw my spirit for the first time, though, that I really felt a connection to my place in the universe.

My first contact with Leo Jean was so exhilarating!  When I arrived at his office, his large Boxer dog growled hello to me.  Leo told me not to worry, because his dog was providing him with some information about me.  I asked if Leo’s accent was French and he stated that he was Belgian.  He said had intentionally kept his accent although he had left Belgium when he was very young.  When I had phoned to make the appointment, I remember saying before we hung up: “We’re going to be such good friends!”  I felt a little embarrassed about that statement at the time, but it turned out to be so true.

As I started to tell him about the recent events that had unfolded, I felt that I could trust Leo with the entire truth of my situation.  I told him about how my then-husband seemed to have been taken over by some supernatural force, and Leo looked me straight in the eye as he told me that he would help me to comprehend what had occurred.  Then I told him about the simian-like beings that I had encountered when I was a teenager.  He told me that we would deal with all that later.  I also asked Leo if it were possible to learn how to use the other 90% of my brain, and he nodded and stated that we would look into it.

Then Leo suggested that we get to work to help me regain my equilibrium.  First, Leo asked if I would permit him to remove all the negativity from me, including that which had damaged my electromagnetic field.  Then he asked me if I would allow him to help me to close my damaged spiritual openings, so that he could perform a healing. Even though I didn’t know what that meant at the time, I agreed because I believed that Leo knew what he was doing.

Once Leo had worked to close and heal my spiritual openings, and to realign my electrical and electromagnetic fields, he then directed me to close my eyes very gently and to mentally ask my spirit to show itself.  No sooner had the thought crossed my mind that I wanted my spirit to show itself, than it happened.  With my eyes closed, I saw a tiny spark of brilliant white light twinkle, then fade into the distance of my mind’s eye vision.  Wow!  That was my spirit!

For the next few minutes, I was flabbergasted.  For all of my life, previous to this moment, I had been searching for something that would give my life meaning.  Now here it was – my spirit!  I was in awe that I actually had a spirit that could respond to me.  The fairy tale was definitely over.  Now I had the most fundamental element of all with which to pursue my life.  All the fear that religions had instilled in their followers about the consequences of being a non-believer was instantly identified.  As I had always suspected, even as a child, it was all just coercive conditioning.

After that healing session, I felt like such a weight had been lifted from me!  I felt happy again.  It was a distantly familiar feeling that I hadn’t felt since I was at least three years old.  I felt invigorated and bubbly.  I smiled so much that day that my face ached from not having used those facial muscles for so long.

That night I received a call from my then husband.  When I told him about my appointment with Leo, he became very upset and demanded to know why I would ever go to see someone like that.  He implied that those types of people are only interested in preying on troubled women.  I assured him that he was wrong and that he should be happy that I was feeling so much better.  My soon-to-become ex was definitely worried.

Leo had invited me to attend one of his evening classes at the college and I was only too pleased to sit in.  Toward the end he asked if everyone had brought their spoons, because he was going to teach the class about mind power.  The students held up their spoons, and Leo directed them how to use their minds to twist their spoons at the neck.  There were many “Ooh’s” and “Ah’s” as the students focused their mental energy at the spoons and twisted them.  I had never seen anything like it before, and was excited about such a different approach to using one’s mind.

A few days later, Leo invited me to meet with some people that had been working with him for a while.  Some of the people were learning to use their psychic skills to help others in the group.  After the others had left, one of the ladies, a registered nurse, told me that she would like to help me.  She asked Leo to help her look at my ex, so that they could help determine what danger he presented.  She asked for my ex’s name and “looked” at him.  She said she saw a tall man with long stringy hair.  I said that my ex had never worn his hair long.

Only then did I remember that he had told me very early in our relationship that he had lived in England for three years and had let his hair grow while there.  I was impressed by how this woman could perceive him directly.  She said that he had been delving into some very dark knowledge during that time and seemed genuinely disturbed by him.  My ex had always told me that I was never to read about, talk about or even think about anything paranormal.  And here was this woman, telling me that my ex had acquired great knowledge of a dark nature.  I felt a cold chill go up my neck.

Then Leo told the nurse that he was going to have to go into a spiritual battle, because my ex and his ex-wife were now attacking him at the higher level.  Right then I had a déjà vu, as if I had already known that Leo would fight my ex at the higher level.  Leo made the statement that my ex’s ex was even stronger than my ex and that she would have to be dealt with immediately.  I was pretty scared for a few minutes, then the fear turned to relaxation as the negativity subsided.  Leo was stopping the attack of negative energy that those people were directing toward me.

Within two days, my ex phoned to say that he would be arriving in town that night to pick me up.  I immediately called Leo and told him that I was still afraid of my ex.  Leo asked me if I wanted to go back with him and I stated that I clearly did not, but that I was terrified of him.  Leo said that he would allow me to stay with him until he left.  I couldn’t believe that I was actually going to get away from my ex!

That night Leo picked me up and took me to stay with him and his family.  The following day my ex showed up at the door and I hid with my head under a pillow, so that I wouldn’t be able to hear his voice.  I was trembling with fear at the thought of having to see my ex again.  After about fifteen minutes, Leo came to tell me that my ex had left, but that he was probably wasn’t going to give up that easily.  I spent a few days indoors so that he wouldn’t be able to approach me on the street.

After we knew that my ex had left town, Leo told me that he had left something for me.  I was puzzled as he showed me my ex’s wedding ring inside a small bottle.  He took it out and balanced it on its edge on the table.  It was vibrating!  I asked what was wrong with it and Leo said that my ex had placed a curse on the ring.  What we were seeing was the effect of the strong negative energy level within the element of the ring.  If I were to touch my ex’s ring, I would once again fall under his influence and would feel compelled to return to him.  I certainly didn’t want that, so I never touched the ring and immediately got rid of it.  It was interesting that, as I got rid of the ring, I got rid of Mr. Corcoran.

Only then did I begin to realize how little love and respect I had for myself before Leo opened my mind to the unseen reality around us.  Throughout my life I had systematically been giving away my positive energy to the predators that had exploited my good intentions in life.  With so little self-respect, my own self-worth had diminished and I felt trapped within the negative circle of guilt, shame and helplessness that I had drawn for myself.  Over the next few months everything would change, as I began to learn about my spirit and the immense potential that it had always offered but that I had never acknowledged.